Dissecting the State of the Union Speech

It would be helpful to always keep in mind that there is an opposite side to everything. Keep this verse in mind, "The first to plead his case seems right, until another comes and examines him." (Proverbs 18:17). As I've been studying the history of government initiatives to better American society I've noticed a common feature that runs through a lot of them: They have the right intention, right facts, but the wrong solutions (and sometimes they don't have the first two). Check out what many independents and moderates have to say about last night's State of the Union Address. I've put together a few videos and one article from a contrarian's perspective. By the way, the Ben Shapiro article is very helpful to understand what Obama (or at least what Shapiro perceives) is saying when he uses familiar rhetorical devices.

[2] Schiff Dissects the State of the Union Address (15 Mins)

Bonus Video: The Lunacy of Government

"Why Deflation is not Inevitable(sadly)"
[1] John Exter's Mistake
[2] The Deflationists' Myth of Japan
[3]Why Currency Withdrawals do not Matter
[4]High Bid Wins
[5]Conclusion
at January 25, 2010 No comments:

As promised I created a blog entry for family fellowship night. Basically, all I really wanted you all to do were three things. One, subscribe to my blog. Two, watch the movies that I recommend. They are free and they are online. Third, check out my old blog posts and keep up with them. An especially important entry is my November 6th, 2009 entry. It is a free financial self-defense book.

Make sure you check out my next blog entry in a few days entitled "Don't Take my Word for It!"
at January 15, 2010 No comments:

No more "Stimulus!" It fuels the fire! 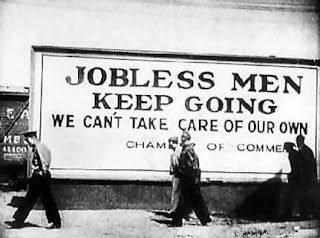 They added fuel to the fire.

Instead of letting market forces do their work, FDR and Herbert Hoover began a long chain of intervention in the economy. This merely prolonged the recovery. This legislation was known as the New Deal.

Economist Thomas Sowell has pointed out that the New Deal did not end the great depression, World War II did. He explains that the War itself wasn't a catalyst for economic recovery since wars increase national deficits and destroy natural resources. Instead, World War II stopped the New Deal - the same intervention that was supposed to help the recovery!

I obviously did not explain HOW the New Deal prolonged the recovery. What I will say is that it reallocated resources to places to where it should not have gone.

Think about it today, does anyone REALLY THINK (besides the Obama Administration) that spending on COSTRUCTION JOBS will help fuel economic growth? How does this help the private sector? By allowing them to travel to work faster?

The Obama administration is making the same mistakes as its predecessors. Little do many know there was a recession in the early 1920's (I think 1920-1922) much worse than the first year of the great depression in the 1930's. But the government did the right thing. They didn't intervene and the recession was over within two years.

Maybe if our government takes its hand off of the economy maybe it will actually be free to grow!