Add presidential debates that are like congressional hearings. Of course, one or two town hall style debates should remain. And even the current format where opponents attack each other with one moderator should remain. But this new debate style should be included, and commence immediately, in September, after the national conventions. Twice a week, for three weeks, for at least three hours, on a different topic with an expert group of questioners, until October. There we can continue with the current debate format.

A debate on: Taxes, Economy, and the Federal Reserve

A debate on: Civil Liberties and Prisons

A debate on: Healthcare and Welfare

A debate on: Internet Regulation and Education Reform

A debate on: Immigration

At least those topic suggestions are a start.

Even in primary season, when the last two candidates not to have dropped out are left, put them through a debate - congressional-hearing style. So I guess I'm playing loose with the term "debate" here. I guess I want - and think the American people deserve - a hearing on all the positions of the people who want to "serve" us.

They can debate about those positions later. 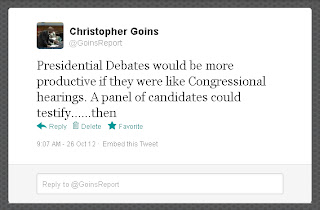 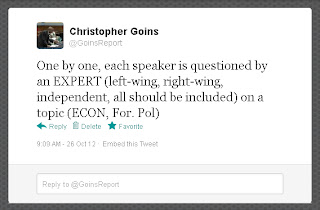 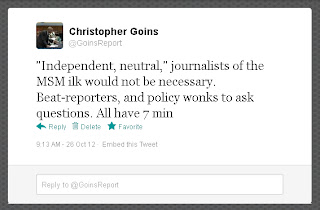 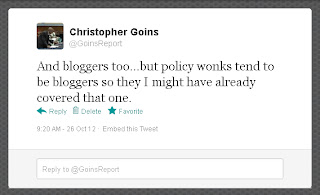 P.S. Yes, I think the "World's Toughest Job Interview" should last three hours. I predict that the shorter debates in October would be more popular. This debate can be relegated to C-SPAN, and other networks that want to cover it.
at October 26, 2012 No comments:


It  turns out that Mitt Romney and other Republican operatives were apparently very much aware of what was going on at the precinct, county, district and state conventions.  This was not greedy state and country chairmen wanting to hang onto power so they could go to the RNC as delegates and get drunk.  The hardball tactics were apparently approved and refined from state to state from Iowa, where the state chairman got money for the GOP and promises and conveniently kept a Santorum popularity vote win and a Ron Paul delegate win, out of the news for months, all the way to Tampa, where pudgy, Romney Brownshirt  goons raced along the streets in golf cart-like vehicles, looking for demonstrators to divert into chain fence cages beyond view of the media.  Welcome to Romney’s America.


What we learned from the convention is that Mitt Romney is a dictator who expects obedience and does not tolerate even the mere appearance of dissent. More ominously, he is also a rules lawyer who is more than willing to smash the spirit of the game while rewriting its rules any time it appears to suit his interests. From keeping important party figures such as Ron Paul and Sarah Palin off the podium to refusing to recognize the duly-elected delegates from Maine, from changing the party rules on the fly to indulging in a Soviet-style vote count in which only votes for Romney were reported, it is clear that Mitt Romney is even more inclined toward authoritarian rule than Barack Obama has ever shown himself to be.

It is deeply ironic that paranoid Republicans, who suspect Obama of secretly planning to circumvent the law in order to rule the country with an iron fist, should turn to Mitt Romney to save them when Romney has already shown his ready willingness to do the very thing they fear.  Romney’s ruthless actions at the Republican convention show every sign that in turning to him, America will be jumping out of the frying pan and right into the fire.

An Excerpt from Thomas Sowell: The Economics of Medical Care

The Economics of Medical Care || Thomas Sowell
at October 18, 2012 No comments: 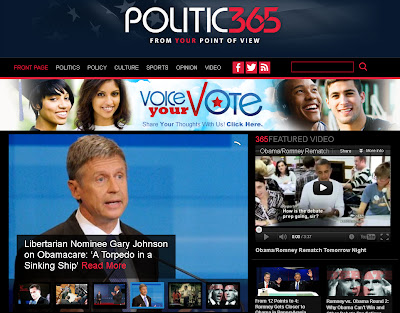 We talked about Syria, al-Qaida, Medicare, Social Security, and Obama. Read about it by clicking the links below.

Libertarian Nominee Gary Johnson on Obamacare: ‘A Torpedo in a Sinking Ship' || Politic365

Sanchez: 'True Progress Toward Liberty Cannot be Achieved Through the Offices of a Gargantuan State'

Danny Sanchez on voting and the cause of liberty:


For one thing, your vote helps provide a mandate for all of the elected officer’s policies, whether you support those policies or not. As one author has said, voting "just encourages the bastards."

Furthermore, every vote for a federal office is a vote for the hyper-state known as the U.S. federal government, and for hyper-states in general. It is effectively an endorsement of centralized power and a vote of no confidence in localism. And yes, this would be true of a vote for a middling libertarian like Gary Johnson, or even an exceptionally heroic individual like Ron Paul.

Vote for Liberty by Not Voting || Daniel Sanchez
at October 16, 2012 No comments:


The truth is the long term solutions to our economic quagmire involve some short term pain.  Re-evaluating the economic role of an institution as insidious and behemoth as the Federal Reserve will inconvenience some people, and those people happen to have a lot of power.  Similarly, the idea of ending government programs and closing down superfluous departments will always upset someone because it means someone will stop getting a government check.

Back to Back Front-Page Articles on CNSNews 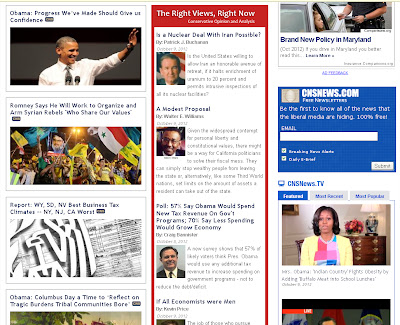 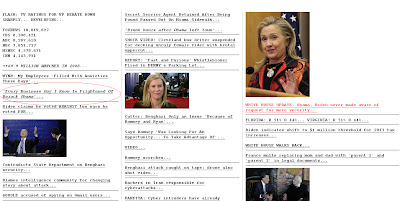 'Every Business Guy I Know Is Frightened By Barack Obama'
at October 12, 2012 No comments:

A Funny Study Exploring the Relationship Between Partisanship and Beauty

Ron Paul: 'Government is a giant, blood-sucking parasite on our otherwise healthy economy'

From His Texas Straight Talk Column:


It's not that nearly half of Americans are dependent on government; it's actually more than half.  If one includes not just people on food stamps and welfare, but also seniors on Medicare, Social Security and people employed by the government directly, the number is more like 165 million out of 308 million, which is 53%.

Government Dependency Will End in Chaos || Rep. Ron Paul
at October 09, 2012 No comments:

Is a Nuclear Deal With Iran Possible?


What would cause anyone to believe Iran is willing to negotiate?

There are the fatwas by the ayatollahs against nuclear weapons and the consensus by 16 U.S. intelligence agencies in 2007, reaffirmed in 2011, that Iran has no nuclear weapons program.

Even the Israelis have lately concluded that the Americans are right.

Nor has the United States or Israel discovered any site devoted to the building of nuclear weapons. The deep-underground facility at Fordow is enriching uranium to 20 percent. There are no reports of any enrichment to 90 percent, which is weapons grade.

Iranian President Mahmoud Ahmadinejad has lately mocked the idea of Iran building a bomb in the face of a U.S. commitment to go to war to prevent it:

"Let's even imagine that we have an atomic weapon, a nuclear weapon. What would we do with it? What intelligent person would fight 5,000 American bombs with one bomb?"

Ahmadinejad did not mention that Israel has 200 to 300 nuclear weapons. He did not need to. The same logic applies.

And then he says something even I didn't know before:


And Tehran seems to be signaling it is ready for a deal.

According to the United Nations' watchdog agency, Iran recently converted more than one-third of its 20 percent enriched uranium into U308, or uranium oxide, a powder for its medical research reactor.

Is a Nuclear Deal With Iran Possible? | CNSNews.com
at October 09, 2012 No comments: