Rothbard on the Libertarian Attitude Toward War

Excerpted from War, Peace and the State:

The libertarian's basic attitude toward war must then be: It is legitimate to use violence against criminals in defense of one's rights of person and property; it is completely impermissible to violate the rights of other innocent people. War, then, is only proper when the exercise of violence is rigorously limited to the individual criminals. We may judge for ourselves how many wars or conflicts in history have met this criterion.

Murray Rothbard, A Libertarian Theory of War
at May 30, 2011 No comments:

Vox Day on the Problem of Evil

The great irony is that despite the world's rejection of God and its foolish embrace of evil, those who find themselves suffering the promised consequences of their actions will end up blaming God for them. Such are the perils of free will.

There are more reasons than ever for me to distance myself away from the rhetoric and e-mails of the National Inflation Association. The two latest Peter Schiff videos explain why (see below).

Interestingly enough, I eventually came to study Austrian Economics because of the NIA. Well, actually Gary North, Thomas Woods, and Robert P. Murphy had more to do with that than the NIA.

It was NIA's first video, "Hyperinflation Nation", produced back in 2009, that first alerted me to the threat of hyperinflation and compelled me to join Gary North's website. Then I read Robert P. Murphy's Political Incorrect Guide to Capitalism that winter and Thomas Wood's Meltdown the following summer. I also began reading Gary North's work, too.

Slowly but surely, I've been inching away from the NIA. As I wrote on April 25, 2011, I no longer rely on them as a credible source. Then again, since about the second quarter of 2010, I haven't been relying on them much anyway. They merely introduced me to the concept of hyperinflation. They have served their purpose.

The Austrians have taken over from there.

Anecdotal minutiae aside, two events within the last year gave me confidence in my own convictions that the NIA is just not the most reliable group around. Good intentions? Yes. Credibility and thoroughness of argument? No.

The second event was Peter Schiff's debunking of NIA's latest pump & dump scheme.
at May 23, 2011 1 comment: 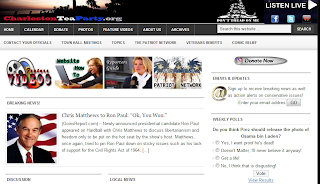 My article on Ron Paul about his appearance on Hardball with Chris Matthews was featured on the Charleston Tea Party website. Here is an excerpt:

It would be wise for conservatives to not ignore these crucial points of history. Because conservatives (and liberals) ignoring history does not mean we won’t repeat it.

Video: Stossel on His Libertarian Views

David Boaz on What Anarchism is Not

Boaz deals with some irresponsible journalism in a recent blog post. He also defends the image of anarcho-capitalists. We should be thankful:

But disgruntled young people, lashing out at the end of an unsustainable welfare state, are not anarchists in any serious sense. They’re just angry children not ready to deal with reality. But reality has a way of happening whether you’re ready to deal with it or not.

You Got Bin Laden, Now Get Out of the Region, Islamists Tell U.S. | CNSnews.com

They are sending a message to us and we need to listen to them! 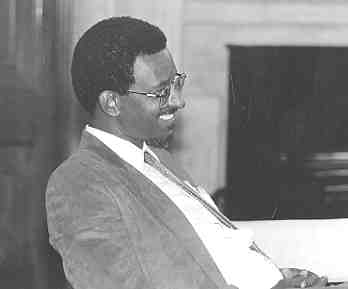 Some politicians pooh-pooh calls for drilling, saying it would take five or 10 years to recover the oil and won't solve today's problems. Nonsense! I guarantee you that if permits were granted to all of our oil sources, we would see a reduction in today's prices.

Why? Put yourself in the place of an OPEC member knowing there's going to be a greater supply of U.S. oil in five or 10 years, which might drive oil prices to a permanent $20 or $30 per barrel. What will you want to do now while oil is $120 per barrel? You would want to sell.

Let's Blame Speculators by Walter E. Williams
at May 04, 2011 No comments:

A Christian Said What?

Jordan Sekulow, son of famed attorney Jay Sekulow, had this to say on Twitter yesterday. Did I mention he was a devout Christian? Warmongerish?

America, though this battle is far from over, we have killed their terrorist leader with a bullet to the head .. all I ask, who's next? #USA

Email ThisBlogThis!Share to TwitterShare to FacebookShare to Pinterest
Labels: Christian Warmonger of the Month, Christianity

an unpredictable event that calls into question a bank's ability to pay the depositors. In the old days, depositors lined up outside a bank. That was the kiss of death. Today, a bank run has to do with rolling over very short-term debt — debt obtained from other banks. The lenders decide that a bank or agency is insolvent. All at once, they refuse to roll over the loans. This is a bank run, but it does not involve depositors lining up outside the bank. It involves a rumor in the financial community. Such a rumor brought down Bear Stearns and Lehman Brothers in 2008. It took less than a week in each case. Word travels fast inside the banking system.

Gary North, Black Swans and Bank Leverage
at May 02, 2011 No comments: