Data: Only 13 percent of "the poor" couldn't obtain medical care due to cost

(GoinsReport) - A 2011 report from the conservative Heritage Foundation shows that the picture of poverty in the United States isn't what it is painted to be by anti-poverty advocates, including access to healthcare.

Among the Census Bureau data compiled by the Heritage Foundation, the data on healthcare access shows that only 13 percent of poor households couldn't afford healthcare.

According to the report: "Although it is widely supposed that the poor cannot obtain medical care, only 13 percent of poor households report that a family member needed to go to the doctor or hospital at some point in the prior year but was unable to do so because the family could not afford the cost."

What makes a poor household varies by the family’s size.

The counted cash income does not include the numerous cash benefits provided by the Federal government.

According to the Heritage report, which uses data from the Census Bureau’s annual poverty report, 46.2 million Americans were poor in 2010.

The Census Bureau told GoinsReport.com that what counts as unaffordable medical care varies.
at April 30, 2012 No comments:

Doctors overseas are going to begin attempts to "shrink" the hearts of patients, BBC news reports.

Three million Americans and thousands of American employers will receive $1 billion - or about $127 per person - in rebates as a result of President Obama's health care law, the Associated Press reports.

In a flashback post, Thomas Sowell asks why is there a regulation on gold in the President's health care law, in a nationally syndicated column.
at April 30, 2012 No comments:

MIT Economist: ‘I’m not convinced that we’ve fixed the problems that led to the financial crisis’ 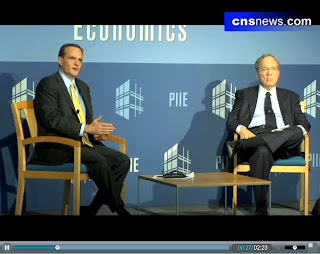 Washington (GoinsReport.com) – An MIT economist said Monday that he isn’t convinced that the steps taken to address the financial crisis of 2008 have actually “fixed” the problems that led up to it.

Simon Johnson, a professor at the Massachusetts Institute of Technology and frequent New York Times contributor, said: “I’m not convinced that we’ve fixed the problems that led to the financial crisis.”

He continued: “There’s a huge contingent liability that looms over us.”

Contingent liabilities are possible obligations to pay a sum depending on how history plays out.

Because obligations are only “possible” at a certain time, and future events dictate if an obligation becomes due, contingent liabilities are kept off the books of financial statements of private firms and, in this case, the fiscal statements of the government.

Johnson made his remarks at the Peterson Institute for International Economics to discuss his new book “White House Burning: The Founding Fathers, Our National Debt, And Why It Matters To You.”

When asked by GoinsReport.com to identify some of the problems that he thought haven’t been fixed yet, Johnson further stated that “the very big banks” were still a problem.

“On the financial side, the main problem is the very big banks, the so-called “too big to fail” banks. It’s very hard to manage problems or liquidation at one of those banks,” Johnson said.

Johnson said that Title II of the Dodd-Frank Wall Street financial reform bill, which authorizes the FDIC to place large, nonbank corporations into a process similar to bankruptcy and allows for the orderly liquidation of nonbank financial institutions covered and not-covered by the Federal Deposit Insurance Corporation, and FDIC’s current attempts to put forth resolution plans are steps “in the right direction.”

“I think these are steps in the right direction but the structures are still very fragile,” he said.

“So the essence of the problem is very big financial corporations that are effectively government subsidized and encouraged to take excessive risk when those structures become high leverage and blow themselves up,” Johnson continued.

“So it comes on top of the spending versus revenue gap that has been developing for some time. On top of that you have a big crisis. And if you can finance it, if you can go through this without a disaster, best-case you have another 40, 50, 80 percent GDP increase in debt. That’s a huge fiscal risk.”

Johnson also pointed out that it is “awkward” that Congressional Budget Office doesn’t score that “huge fiscal risk” because it does score other kinds of contingent liabilities, such as Medicare.

“They should do the same thing with the financial crisis, but they don’t,” he said.

Johnson, alongside Sheila Bair, the former FDIC chair, recently sent a letter on March 30, 2012 to the Federal Reserve giving recommendations on how to dissolve the large financial institutions.

He also said that Medicare would be a contingent liability 50 years down the road.
at April 16, 2012 No comments: 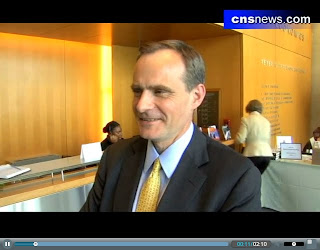 (GoinsReport.com) -- An MIT economist said that although all the GOP Presidential candidates economic proposals are, in his view, “equally bad,” he pointed out that Rep. Ron Paul’s (R-Texas) economic proposals to balance the budget are “extreme.”

Simon Johnson, professor at the Massachusetts institute of Technology and frequent contributor to the New York Times, made his remarks after speaking about his new book “White House Burning: The Founding Fathers, Our National Debt, And Why It Matters To You” at the Peter Institute for International Economics.

The Paul proposal rapidly cuts spending by closing five cabinet departments, including the Department of Education, and ends foreign wars and corporate subsidies, while returning most other spending to 2006 levels, thus relieving the budget of $1 trillion after Paul’s first year.

GoinsReport.com asked: “Pulling out the Ron Paul plan which would cut a trillion (dollars), including five cabinet departments would go away, is that a bad way to move forward?”

Johnson said: “Mr. Paul’s proposals are very extreme and he wants to reduce revenue. So he wants to make some extreme spending cuts and reduce revenue but he still gets debt relative to GDP 90 percent. That’s a high level of debt because he’s so keen on cutting revenue.”

Johnson was referring to results found by the Center for a Responsible Federal Budget when it produced a report in February called “Primary Numbers: The GOP candidates and the National Debt,” which analyzed the fiscal consequences of each GOP presidential candidates’ economic proposals.

In that study, Paul’s plan in the worst-case scenario, dubbed the “high-debt” scenario, would increase the debt as a share of GDP to 93 percent of the economy by 2021.

However, as Johnson later acknowledged, the debt as a share of GDP is lower in two more optimistic scenarios.

“In the most optimistic scenario the debt goes down closer to 80 percent,” Johnson said. “But it’s still a high level of debt relative to what we’ve had historically and what would be safe for the United States going forward.”

Johnson, when asked if wanting to balance the budget in three years was a “bad idea,” didn’t comment on whether it was a bad idea or not but instead said it was “unnecessary.”

“You have to look at exactly how the economy is doing. Because if you have a big enough boom to get the revenues going back, then it makes it much easier to balance the budget,” Johnson said.

“But I think the amount of fiscal adjustment or austerity he wants to do upfront is probably more than the economy can handle at this point. So I would be much more cautious in my approach,” he continued.

Johnson also told GoinsReport.com what he thought about the other three Republicans seeking the presidential nomination.

“Well, what I think with regards to the budget, they’re all on the side of too much cutting taxes and being careful about the debt,” Johnson said. “They claim to be fiscally conservative but they’re not conservative actually by any historical comparison. They’re rather irresponsible.”

When asked whether he thought their proposals “cut too fast, too soon,” Johnson said “absolutely.”

“Look, we undermine tax revenue for more than 30 years in this country,” Johnson said. “We’ve had a big tax revolt. We can’t afford to cut taxes at this point. We need to control spending and raise revenue. Not cut revenue.

He added that no plan sticks out to him and that they are all “equally bad.”

“I think Mr. Newt Gingrich’s plan is the worst but the others are all pretty bad,” Johnson said. “There’s not much to choose between them.”

The CFRB study that Johnson refers to contradicts the Ron Paul 2012 campaign’s claim that the Paul proposal balances the budget by year three by saying that it, nor any other candidates’ plan, balances the budget at all.
at April 16, 2012 No comments:

Gangster government is about something else: about governing without recognizing the legitimate limits of one's power. It's about officials who use public office to make winners into losers and losers into winners; who bend, break and make the law to help their friends and punish their enemies.

Creating money out of thin air, on the other hand, allows the money creator to enter the market and seize goods or services he wants without having supplied anything himself.

Fiat money artificially and unjustly increases the wealth and economic power of the banking system, well beyond what would occur in the free market.

Is Ron Paul wrong on Jerusalem?

How To Skin Naive Conservative Donors, Decade After Decade, and How To Avoid Getting Skinned || Gary North
at April 13, 2012 No comments:

The news is stuffed with "studies" in which "experts" tell us how we should behave. One recently found that conservatives have lost their trust in science over the last 40 years. That's probably because the very political academics of science are routinely summoned to prove the right-wingers are not only wrong but dangerously wrong and not just dangerously wrong but evil, too.

Some Very Political Science | CNSNews.com
at April 12, 2012 No comments:

The apostle Paul saw some great ministry possibilities in his life situations. He used the open doors God provided to witness for Christ.

Video: Why Not Print More Money?