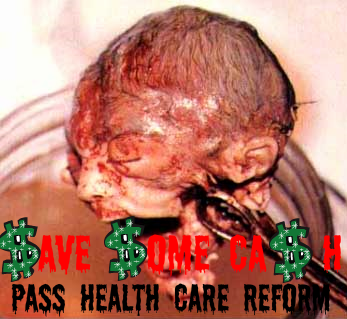 Ken Connor of Townhall.com has recently written an article explaining the reasoning behind including federally-funded abortion in a health reform package that is meant to save the average American moola.

What's the reason? Basically, it's utilitarian:

“If you pass the Stupak amendment, more children will be born, and therefore it will cost us millions more. That’s one of the arguments I’ve been hearing. . . . Money is their hang-up. Is this how we now value life in America? If money is the issue – come on, we can find room in the budget. This is life we’re talking about.” ~Bart Stupak on his Democratic Colleagues

In all honesty, Bart Stupak would have been a hero if he had not gone to vote for the health care reform bill. But he went against his own principles, and that is unacceptable.