Christopher Hitchens, my home boy, and I 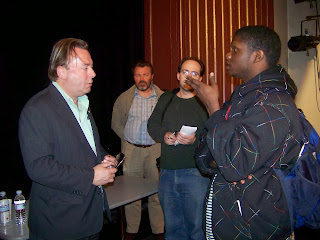 No, that's not me on the right. That's the person I went to the "What Best Explains Reality: Theism or Atheism?" debate with featuring Frank Turek vs. Christopher Hitchens on March 31, 2009 at TCNJ. This was moments after I met Christopher Hitchens for the second time. He had signed the original copy of a 500 word profile of him I wrote for my magazine writing class in Spring 2009.

"Do you have an extra copy?" I recall him asking.

I didn't. And in fact, I thought about leaving him a copy but there wasn't a Kinko's in sight on our way there.

If I remember correctly, I was the last person to have anything signed by Christopher Hitchens that night. It was getting late. Christopher had already signed tons of autographs. And I believe he had a plane to catch.

My homeboy, then a Christian, asked Christopher why he didn't believe in God?

It was one of those, "it's obvious there is a God, why don't you believe in him?"-type questions. It was very passionate.

But my friend asked him the question as he was still sitting down. I had just stepped away after my paper was signed. Shortly after saying something, Christopher Hitchens stood up, and either he or his help had a gray wheeled luggage bag (or maybe I'm confusing his bag for the one Frank Turek possibly had). He told Christopher about his flight.

That one Christian guy who asks atheists why they don't believe

I was reminded of the entire 2009 TCNJ scene when an old white man, after the Q&A opened up, popped the first question to ask Richard Dawkins at the National Press Club a few weeks ago. Also admittedly an atheist -- at least for that night -- Sally Quinn, a long-time Washington Post reporter and editor, gave one of the worst interviews of Richard Dawkins I've ever seen.

Why do I say that?

Because she steered the conversation to make Richard Dawkins says things that he has literally said 1,000 times before in his speaking and debate circuits after the publication of his 2006 bestseller The God Delusion. We could Wiki some of his answers. This lady is a religion editor. You would have thought she would have done her homework. Maybe she did. Maybe she had done the kind of preparation for a test where the examiner doesn't question you on anything you had studied for. That would be apt, except she was the examiner. And examiner decided to test you on last month's material, which you certainly knew, but were prepared for something more recent (Does this hypothetical ever happen? lol)

Richard Dawkins was there on September 30, 2013 to discuss his new book "An Appetite for Wonder: The Making of a Scientist" (2013), the first half of his two-part memoir. The best she could have done was read excerpts from the book, and then ask him to expound on that.

"What did you mean when you said..." would have been a much more productive way of interviewing than pointing out he became an atheist in his teens (something he has said many times before) and contrasting that with her own awareness that she was an atheist at age 5. Instead, she barely asked about the book, in my view. As I see it, she was a Washington Post reporter getting an exclusive interview with Richard Dawkins and used her exclusive interview to self-servingly get some personal questions answered.

Anyway, after what I guess was a half-hour of virtually unproductive conversation, the Q&A started.

The aforementioned first questioner asked "Why don't you believe in the empirical evidence of the resurrection of Jesus Christ?"

The question brought me back to my friend who asked a similar question with the same underlying vein: "Dear atheist, why don't you see it?"

Thank you for saving me, Richard Dawkins

I respected the question. Both questions. But I must say the following time was spent on two non-questions, a question about when atheism is going to catch on (or something like that) and at least one conspiracy-deny conspiracy theorist. I'll get to the latter in a second.

But a woman explained that she was on the way to the nunnery when she picked up a copy of Richard Dawkins' classic The Selfish Gene, which was even required text for some classes at my alma mater of La Salle University. At that point, she had dropped everything, changed course of her life to one that was religious and would have been completely religious if she had become a nun, and embraced the secular life in all its wonder.

Another man, a former Muslim originally from a Middle Eastern country, explained that it was The Selfish Gene that was the text that changed his outlook on life.

Another guy, who apparently attempted to indulge in some camaraderie before posing his question by, I think, tipping his hat towards The Selfish Gene or maybe some other RD work, asked something to the effect of "What do you think about Government conspiracy?" I believe it dealt with the fact that governments lie. That is true. (I'm sure the question is on tape. That will correct the record.) But there was some brief mention of 9/11 conspiracy theories, but the way it was postulated it was like he was trying to have it both ways. Sure he was secular, maybe even thought of himself as a critical thinker, and whatever he researched in his personal time he may have indeed had some good points, but the way he asked his question was ambiguous, and one wouldn't know if he was pro-conspiracy theory or not (I, for one, think they're OK, if support by facts). Richard was puzzled. So was I.

It also reminds of the way Sally Quinn conducted her interview. Not that her questions had anything to do with conspiracy. They didn't. But I feel like she used the opportunity to ask questions so he could answer and, in effect, do the research for her.

And that's the same way I felt with the guy. Richard Dawkins, by all accounts, is a scientist, not a philosopher of religion, or a political philosopher. (He did mention he wanted to live in a world where people pay taxes, as if taxes were moral things in themselves. In that case, I wouldn't want to live a world that Richard Dawkins gets to construct.) So asking him a political question is kind of intellectually lazy on the questioners part, because it seems like all these people want them to do is give free advice or do the research for the person.

Can we finally--finally!--talk about the book? 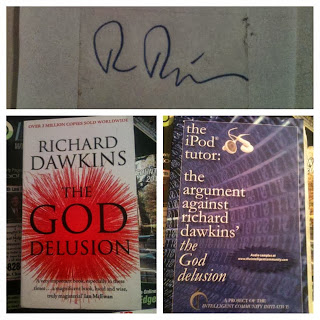 In the end, I met Richard Dawkins for the first time. Saw a buddy -- who described himself as "not convinced" by Dawkins and somewhat of "a mystic" -- I recently met a few weeks ago there. And got two RD's signature. It was the only novel thing I got from the experience, and perhaps the only novel thing other attendees got from their experiences. It's not like they could get a novel interview when it's conducted by Sally Quinn. Not that day, at least.

I did entertain a few people waiting in line to get there book signed. And one guy, probably one of the only other black people in the crowd (whether Tea Party rallies or anti-war rallies, politically left or politically right, black people hardly are in the crowds where I do my serious reporting or blogging) recommended I buy Vincent Bugliosi's "The Divinity of Doubt: The God Question." It has been added to my Amazon Wish List.

I ordered The God Delusion a few days before, and so I didn't have the physical copy in front of him to sign. He signed my Amazon receipt instead, which I cut out and pasted into my copy of The God Delusion when it arrived in the mail days later.

The other thing I had RD sign was a printed page of the old Richard Dawkins website. There was a post on there about Richard Dawkins "fleas" (the number of response books to The God Delusion). The blue response book, picture above, is what I originally planned on posting that second RD signature into. I haven't done that yet. The Ipod Tutor: The Argument Against Richard Dawkin's The God Delusion is one of three response books I own. I also own secular Jew, agnostic, and mathematician David Berlinki's book "The Devil's Delusion: Atheism and it's Scientific Pretension's" and Christian and mathematician John Lennox's "God's Undertaker: Has Science Buried God?" I bought all three response books back in college prior to 2011. Perhaps all prior to 2010. I haven't completed one, although I did get through a good portion of Lennox's book back in college, with the highlights, and red and blue ink to show for it. I plan to read all four books soon, meaning within a year or two, starting with the Dawkin's book.

He (RD) was eminently pleasant, by the way.

"Do you want me to sign here?" he said. I was in awe and calmed by his pleasant demeanor.