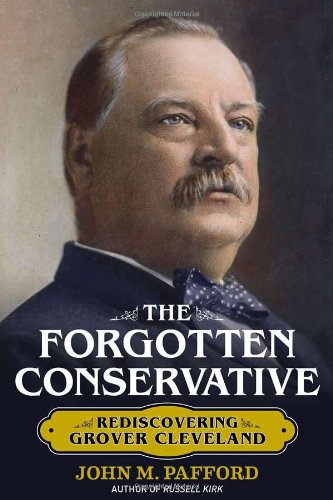 The last self-consciously Christian President was Presbyterian Grover Cleveland, who favored a gold standard, low taxes, free trade, and who vetoed more bills in two terms than any other President in history. (He had been known as the "veto mayor" of Buffalo, New York.) He served two terms, 1885-89 and 1893-97. From that point on, Christian politics slid down the road toward modern statism.

Those are his principles. Wikipedia has this nice summary:

Cleveland was the leader of the pro-business Bourbon Democrats who opposed high tariffs, Free Silver, inflation, imperialism, and subsidies to business, farmers, or veterans. His crusade for political reform and fiscal conservatism made him an icon for American conservatives of the era.[1] Cleveland won praise for his honesty, self-reliance, integrity, and commitment to the principles of classical liberalism.[2] He relentlessly fought political corruption, patronage and bossism. Indeed, as a reformer his prestige was so strong that the like-minded wing of the Republican Party, called "Mugwumps", largely bolted the GOP presidential ticket and swung to his support in the 1884 election.[3]

Libertarians tend to acknowledge Cleveland as one of the better U.S. president in American history when asked who is the best president. Mr. Libertarian himself, Murray Rothbard, the founder of modern Libertarian, thought that Martin Van Buren was the "best" (least bad) U.S. He briefly mentions Grover Cleveland and his major screw-up: the interstate commerce commission.


For more reading, check out the links below: