Misleading Headline: Iran Vows to Enemies Will Not Survive

Finish the headline for goodness sakes (Iran Vows Enemies Will Not Survive -- If Attacked First). This is so misleading. (And it's in bright red at that) 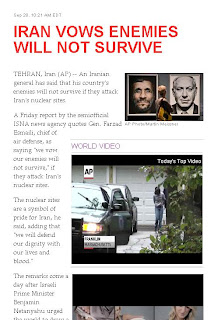 From the Associated Press:


TEHRAN, Iran (AP) -- An Iranian general has said that his country's enemies will not survive if they attack Iran's nuclear sites. (emphasis mine)

We can stop here. But let's go on.

A Friday report by the semiofficial ISNA news agency quotes Gen. Farzad Esmaili, chief of air defense, as saying "we vow our enemies will not survive," if they attack Iran's nuclear sites. (emphasis mine)

It's clear as day, Iran isn't going to attack anyone unless they're attacked first.
at September 28, 2012