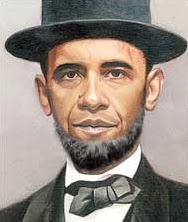 Saying Lincoln freed the slaves is like saying Obama ended the war in Iraq.

...Lincoln never thought blacks to be equal and once said that if he could "save the Union without freeing any slave, I would do it."


Myth #1: Lincoln invaded the South to free the slaves. Ending slavery and racial injustice is not why the North invaded. As Lincoln wrote to Horace Greeley on Aug. 22, 1862: "My paramount object in this struggle is to save the Union, and it is not either to save or destroy slavery. If I could save the Union without freeing any slave, I would do it"
Congress announced to the world on July 22, 1861, that the purpose of the war was not "interfering with the rights or established institutions of those states" (i.e., slavery), but to preserve the Union "with the rights of the several states unimpaired."

Myth #3: Lincoln championed equality and natural rights. His words and, more important, his actions, repudiate this myth. "I have no purpose to introduce political and social equality between the white and black races," he announced in his Aug. 21, 1858, debate with Stephen Douglas. "I, as well as Judge Douglas, am in favor of the race to which I belong having the superior position." And, "Free them [slaves] and make them politically and socially our equals? My own feelings will not admit of this. We cannot, then, make them equals."
In Springfield, Ill., on July 17, 1858, Lincoln said, "What I would most desire would be the separation of the white and black races." On Sept. 18, 1858, in Charleston, Ill., he said: "I will to the very last stand by the law of this state, which forbids the marrying of white people with Negroes."

Lincoln supported the Illinois Constitution, which prohibited the emigration of black people into the state, and he also supported the Illinois Black Codes, which deprived the small number of free blacks in the state any semblance of citizenship. He strongly supported the Fugitive Slave Act, which compelled Northern states to capture runaway slaves and return them to their owners. In his First Inaugural he pledged his support of a proposed constitutional amendment that had just passed the U.S. Senate and the House of Representatives that would have prohibited the federal government from ever having the power "to abolish or interfere, within any State, with the domestic institutions thereof, including that of persons held to labor or service by the laws of said State." In his First Inaugural Lincoln advocated making this amendment "express and irrevocable."

Lincoln was also a lifelong advocate of "colonization" or shipping all black people to Africa, Central America, Haiti--anywhere but here. "I cannot make it better known than it already is," he stated in a Dec. 1, 1862, Message to Congress, "that I strongly favor colonization." To Lincoln, blacks could be "equal," but not in the United States.

...And President Obama lobbied the Iraq government to stay in longer but got booted out.


The last U.S. troops left Iraq in December 2011, while Barack Obama was president, but the “status of forces agreement” that governed the departure of U.S. troops was actually negotiated between Iraqi and U.S. officials in late 2008, under the auspices of President George W. Bush.  In fact, none other than the Huffington Post actually pointed out that as president, Obama was actually interested in keeping troops in Iraq past the agreed-upon 2011 deadline, explaining that “the president ultimately had no choice but to stick to candidate Obama's plan -- thanks, of all things, to an agreement signed by George W. Bush.” Just six months before the Bush deadline, Obama tried to foist 10,000 U.S. troops on the Iraqis past 2011.

So Republicans and Democrats are being disingenuous when they say these men did these things.
at May 29, 2013