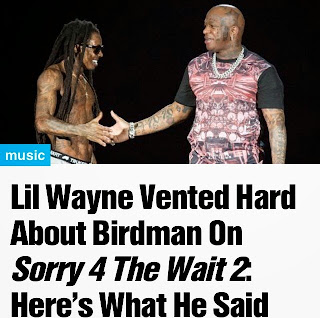 "These crooked a** cops still winning

New Orleans MC Lil Wayne rapped the above lyrics in a song off of his new "Sorry 4 The Wait 2" mixtape. The song "Trap House" is the second track.

The lyrics were a shot at President Obama for not doing enough in response to the deaths of Eric Garner, Michael Brown, Tamir Rice and countless other black men, teens and boys who were killed at the hands of police officers in the United States.

President Obama briefly referenced the issue of police brutality directed towards African-Americans as "the events of Ferguson and New York" in his 2015 State of the Union address Monday night.

Additionally, last December the president proposed a $263 million spending package that will "increase the use of body-worn cameras, expand training for law enforcement agencies (LEAs), add more resources for police department reform, and multiply the number of cities where DOJ facilitates community and local LEA engagement," according to a White House press release.

Critics are skeptical that body cameras will work, citing the non-indictment of NYPD officer Daniel Pantaleo, the officer who put 43-year old Eric Garner in a chokehold on camera.

Lil Wayne released the mixtape Tuesday. The screenshot above is from an MTV2 article.
at January 22, 2015