In the past 30 years, the U.S. Federal Government Seized $51 Trillion from its citizens 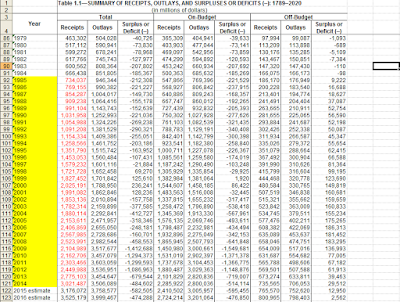 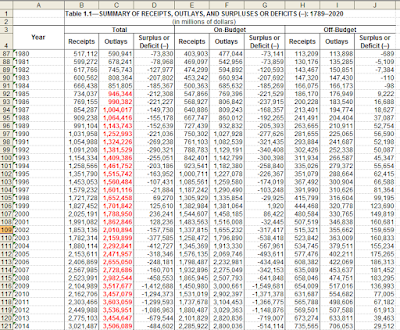 This blog post comes at a time where a constantly resurfacing blog post (true or not) about black Christian churches voluntarily receiving hundreds of billions of dollars over a similar 30 year time span keeps grabbing people's attention on social media.

This blog post attempts to put that in context, if not set it straight altogether.

Despite multiple websites such as AllChristianNews and Urban Intellectuals posting the article, the original source of both posts is a 2009 blog post by HarlemWorldMagazine. The current link is broken. But the original post was archived thanks to the Wayback Machine.

Such blog posts talk about a so-called "return on investment" that black communities are receiving from their churches...

...but one has to wonder what is the real return on "investment" -- because we all know taxes are for investments -- that the black communities are receiving from the U.S. Federal Government.

In fact, the last time the Federal Government took less than $420 billion in a year from its citizens (and remember, this is still by force; non-compliant citizens will go to jail) was 1978.

“The church has gotten caught up in materialism and greed, a lifestyle. Many ministers today want to live like celebrities and they want to be treated like celebrities. In other words, instead of the church standing with the community, the church has become self-serving. It has strayed away from its mission” according to Dr.Love Henry Whelchel, professor of church history at The Interdenominational Theological Center in Atlanta.

Ahh yes, materialism....greed...things the Federal government is not guilty of.


LiveSteez’s investigative series will take a forensic editorial approach to quantifying the return to Black America for the $350 billion in tax-favored donations it has given to the Black Church, examining the arguments on both sides of the pulpit. In this series we will seek answers and advisory to the following questions:

- How often and how much do church leaders take advantage of the faith of poor black people?

-We will investigate and indentify (sic) the churches they are showing a strong return on investment that goes beyond inspiration.

- What does the black community have to show for the $350 billion in tax free dollars?

- Expert analysis on what could potentially be done with such a huge amount of money and how it could improve the state of our communities.

- Why do some church leaders refuse to participate in the Grassley congressional Investigation, which requested the financial records of several mega-churches.

And as a counter investigation, the Goins Report will investigate the return of "investment" to all of the United States for prying $51 trillion out of the hands of its citizenry.

We will ask the following questions:


A) How often and how much do politicians take advantage of the faith of poor black people?

B)We will investigate and identify the communities that are showing a strong return on investment that goes beyond inspiration.

C) What does the black community have to show for the $51 trillion in private wealth stolen from them and their fellow non-black citizens?

D) Expert analysis on what could potentially be done with such a huge amount of money and how it could improve the state of our communities.

E) Why do some political institutions, such as the Department of Defense and the U.S. Federal Reserve, refuse to participate in an audit?

B) Washington DC and the surrounding Maryland and Virginia suburbs, according to a 2013 report. According to a 2011 report,  Washington DC was the Richest city in the country. Could that be because there is a buzzing bureaucratic state surrounded by tons of lobbyists and workers in the defense and security industries?

C) Twice as much unemployment as whites.

D) The African-American community would be so rich that they could spend their money on their own education, food, healthcare, etc.

E) The Fed would claim that an audit interferes with their allegedly politically independent nature. But Rand Paul provides a better answer. And I don't know where to start with the Pentagon, but there is trans-partisan support for an "Audit the Pentagon" bill. Rand Paul supports that too.

In the end, all of the hysteria over churches is about comparatively nothing. Comparatively.

The author still has serious exegetical problems (scriptural interpretations) of the prosperity preaching. But however "fruitful" misguided prosperity preaching is in convincing people to voluntarily give their income to religious institutions, it pales in comparison to the against the sophistry and use of force by the Federal Government to take money from its citizens.

Not a single person went to jail for not paying their tithes.

But try not paying your taxes and watch what happens.

Secondly, look at how much of a stretch the biased anti-Christian blog posts have to take. They have to go back 30 years to make the Black Church try to resemble anything that looks bad.

Religion, in this case, is a red herring -- a distraction -- from the larger issue of state power. In fact, if you want to keep religion involved, then I would say it is the false religion of the state that is at issue here; not true religion; not Christianity.

LiveSteez, by the way, is defunct.