Announcement: I am a Sunday School Teacher Now!!!

A couple of weeks ago my pastor asked me if I would be willing to teach the high schoolers and middle schoolers at our church in Sunday School. I gladly said I would consider it, and ultimately accepted the offer.

The topic was the pastor's choosing.

What's interesting is that the year this book was published I visited, but ultimately did not apply to, Reformed Theological Seminary. I can't recall if I met the author. I did, however, meet some of his colleagues mentioned in the book, such as Peter Lee of RTS and Scott Redd.

I will be publishing my weekly Sunday School Notes here at The Goins Report.

While this series will not initially be recorded, it may be recorded in the future, or the next go around.

However, I plan to have a couple of video series (potentially on Youtube or Udemy at no cost, initially; or some free and some at low-cost) potentially on the following topics: 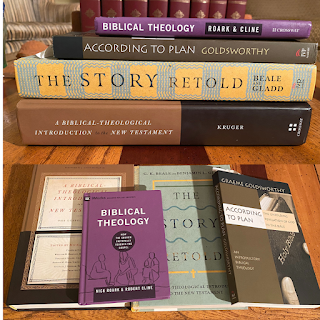 P.S. I am a huge, huge fan of Biblical Theology as my growing collection of BT books attests to. But my first introduction wasn't an explicitly BT book per se. It was this one. The introduction and the first chapter are gold. And then some people at my church also introduced me to the now-defunct Northwest Theology Seminary which has a BT Primer on their website.
at September 16, 2021