The Difference Between a Tea Partier and a Socialist

Washington Post columnist Robert J. McCartney went to the Washington Tea Party expecting racism and violence. Not only did he find neither, he found that he agreed with some things (not a lot) the Tea Partiers had to say, and disagreed with their solutions. 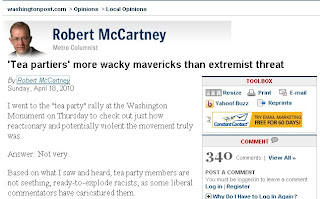 I part ways with the tea party on how to solve the problem. They want only to slash government. I'd be willing to raise taxes as part of the deal.

Even John Maynard Keynes, arguably the economist most influential to American economists and most damaging to the prosperity of the United States, said that you do not raise taxes during a recession.

The second one is disgusting:

Some participants had far-out views. I heard proposals to repeal the progressive income tax, abolish the Federal Reserve Board and privatize the U.S. Postal Service.

Basically, he wants the solution without getting rid of the problem. Keep the Fed. Keep the U.S. Postal Service publicly funded. Keep the progressive income tax.

That's what he calls "progress."

You can read the rest of his article here.

Oh, and while your here check out the Hayek/Keynes rap. "Fear the Boom and Bust"