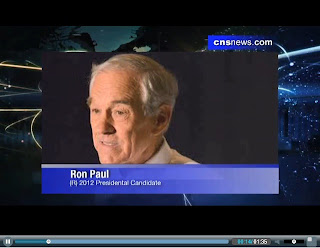 Washington (GoinsReport.com) – When asked whether he agreed with GOP presidential candidate Herman Cain on his suggestion that Federal Reserve should go back to a single mandate focusing on price stability, GOP Presidential Candidate Ron Paul said that he “hardly” agrees.

Price stability refers to the concept that prices levels are constant enough that people won’t take into account price inflation when making decisions as a consumer – not that the value of the dollar will remain the same.

On numerous occasions this year, including at the CNN-Tea Party Republican debate in September and during a press conference with reporters at TeaCon 2011, Herman Cain said that he did not want to end the FED but return it to a single mandate where the central bank allegedly only focused on price stability.

During the CNN Tea Party debate in September, Cain said “For many, many decades the FED did its job when it was singularly focused on sound money.”

At TeaCon 2011 he said, “it [the FED] really needs to just focus on monetary price stability the way it did from 1913 all the way up to the year 2000. It got off track when the federal national debt hit 14 trillion dollars and when foreign countries cooled off on buying our debt.”

Paul said: “Well, hardly. He’s part of the Federal Reserve System and I want to get rid of it. So he’s trying to patch it up. No, I wouldn’t agree with it.”

The Texas congressman made his remarks Wednesday morning (Nov. 16) after the 29th Annual Monetary Policy conference in Washington, DC.

In his speech Paul was skeptical of the idea moving the FED’s dual mandate of using monetary policy to maximize employment and achieving price stability to a single mandate focusing on price stability alone.

“Since I don’t like the Fed, I’m not interested in worrying about what the mandate should be because they’re not going to do it anyway,” Paul said.

He added that “deep down in their hearts” their real goal is to accomplish the liquidation of debt with inflation.

“That’s not too hard to understand that if they can get 50 percent inflation rate in a year or two that takes our $15 trillion debt and cuts it in half,” Paul said.

In his speech, Paul said that he would not end the Federal Reserve in one day because it will “eventually shut itself down” when it destroys the currency. Rather he will work to break the FED’s monopoly on issuing currency by legalizing sound money including gold and silver and repealing legal tender laws.

He added that we should repeal taxes on gold and silver and even allow private mints to issue gold.

GoinsReport.com also asked Mark Calabria, a Cato Institute policy scholar in attendance, to give his opinion about Herman Cain’s statements about the Federal Reserve.

On Herman Cain’s timing of when the Federal Reserve abandoned a policy of price stability he said, “I would disagree somewhat in that particularly during the 60s and 70s we where seeing double-digit inflation. We certainly weren’t seeing a very good track record from the Federal Reserve.”

He added that because of the FED’s involvement in the Great Depression, which is still debated by economists today, “it would probably be generous to say that the FED has been a success even half the time it’s been around.”

In support of that, he highlighted the FED’s role in contributing to the real estate bubble and stock market bubble in the 1920s. He also said that problems the FED got into in 60s and 70s were a result of abandoning price stability as their primary goal.

Additionally, he said that he agreed with Cain’s comments that if the FED focused on price stability alone then they would do a better job.

Calabria said the FED got off track “long before” the U.S. national debt hit $14 trillion, a point it hit in late 2010, and when foreign countries slowed their purchases of U.S. debt. He added that when the debt started to skyrocket “they got even more off track.”

For him, the Phillips curve framework where “they believe that a little more inflation gets them a little less unemployment” took the FED off track. As an example, he cited the Federal Reserve cutting interests rates after the dot-com bubble and again after Sept.11 out of concern for reducing unemployment.

Calabria recently testified in October before the House Subcommittee on Domestic Monetary Policy and Technology Committee on Financial Services which Paul serves as chairman.

At the TeaCon 2011 press conference, Cain also said that the Federal Reserve System is not unconstitutional – a point in which Congressman Paul would sharply disagree with as well.

Rick Santorum has also said that he would, like Herman Cain, focus on bringing the Federal Reserve to a single mandate.
at December 08, 2011