How I beat Amazon and bought nine books for $6.00 at the Library 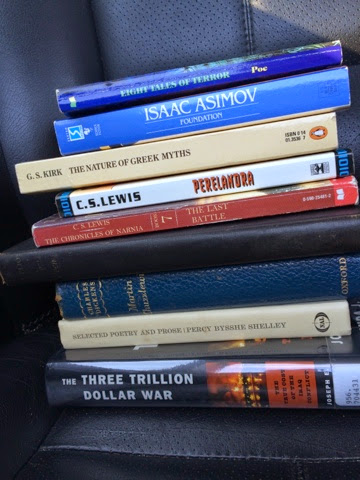 Libraries can be a great resource for finding books at dirt cheap prices.

I went to the library this past Saturday with no intention on buying books. In fact, it didn't even cross my mind that I could buy books there. I haven't bought a book from a library since 2010 -- and that was in South Carolina, not a Maryland library (I did buy some used books from my university in Pennsylvania  that year and they did have to collect money via cashier. I discuss the drop box vs. cashier factor below.). All I wanted was a place to conduct quiet study, but then I noticed there was a book store within the library.

The books I picked up were written by some of the best authors of all time (of course, with time, all "all-time greatests" lists keep growing with the number of books that come out.)

My local library had a 3 paperbacks for $1.00 sale. And sold each paperback for $0.50. Each hardcover book was a dollar each.

Here is what I picked up:

-The Last Battle (Book #7 of the Chronicles of Narnia Series) by C.S. Lewis

-Foundation (from the Foundation Series) by Isaac Asimov

-Perelandra (Book #2 in the Space Trilogy) by C.S. Lewis

-The Nature of Greek Myths by G.S. Kirk

One of the benefits of spending an extra 10 minutes perusing through the used book shelves was that I found a book that I always wanted to read that was at a much higher price when it first came out or at was least closer to the original publication date. That book was Trillion Dollar War.

There are three ways this sale beat Amazon.

Second, I can preview the inside of a used book. If I didn't like it, if it had too many markings that would have distracted me from my personal study and note-taking process, then I could have put it down. You can not do this with Amazon purchases. Rather, you are left to put faith in the description of the product. For example, the penny book mentioned above, which would have no longer been a penny once shipping and handling kicked in, has the following description on Amazon: "Used may contain ex-library marking, notes or highlighting, may no longer have it a dust jacket." (I didn't correct the grammar.) In other words, you wouldn't know what condition it came in. I've never tried it, although I have thought about it, but perhaps you can ask an Amazon dealer what exactly is in the book. Again, I never tried that route. But that could potentially take forever.

But then comes the price factor: the library book would still be cheaper and you would have it immediately. Literally, at this library in Maryland and the library in South Carolina there were money drop boxes next to the used books shelves. You would virtually walk away from the book shelf with your book. And please, don't steal (Exodus 20:15). In both of my experiences there were no receipts, cash registers, or cashiers involved.

Third, there is no shipping and handling for all books combined. This is important because Amazon (or the dealer through Amazon) charges $3.99 per book, even if the books are coming from the same seller. I could be mistaken, but I have yet to see an exception to this. So nine books at $0.01 each would still be $35.91 in shipping alone through Amazon. When you add the nine pennies (the price of the books combined) that's $36.00.

Just a side note: I recently attempted to purchase a "New" or Used but "Like New" book on Amazon from a dealer and it never came after 20 days. I purchased it July 15. Amazon told me it would arrive on August 5. I waited and complained maybe a day or two later. I didn't even get a shipping notice there entire time. The dealer was new. I canceled and they never deposited my money anyway. Amazon was very fast investigating my claim.

Other benefits of buying from the library include being able to find books from famous authors that you never heard of before. Everyone has heard of Charles Dickens' David Copperfield (I think), but I had never heard of Martin Chuzzlewit (perhaps I'm showing my -- lack of -- Dickens knowledge here). Granted, that seems to be the oldest book from above stack. It certainly smells old. But that's the price I paid. All of the other books were in great shape. All but one of the books had markings in them (and the mind chap had the courtesy to write in pencil). And all except one of them had that "old book" smell. But even after I opened it up a few times, the smell went away.

I now have books from some of the greatest authors ever, for cheap.
at August 17, 2014