I think this child abuse campaign is by far the best activism campaign on Facebook by far. It's trendy. It's meaningful (more meaningful than the last trend Q&A) and it gives people a chance to think about their childhood.

I personally believe it is working in two ways: (1) People are learning about what is making people change their profile pictures to cartoons. My evidence: 50% of Google Searches (10 out of the top 20 searches of today) are cartoon related -- and there is no good reason to believe that Road Runner or 90's cartoons would make a resurgence like this in a day absent of this facebook phenomena; and (2) There has been a sharp uptick of child abuse related searches. One of the rising searches is "Child Abuse Facebook" as evidenced by the chart below. 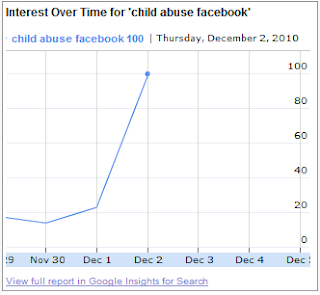 These searches have primarily been in the United States and part of the U.K., although not so much there.

There's a really hot tweet out bashing the campaign. It goes like this: "Changing your profile picture to a cartoon to prevent child abuse is like changing your avatar to a treadmill to prevent obesity."

This is only half true if you do nothing about it.

Another goes like this: "I don't see how changing my profile picture will end child abuse by December 6."

You know, I never really thought that was the point.

And no, I don't believe child abuse will end on Monday when everyone switches their profile pictures back to normal. That's unreasonable, Utopian, and far-fetched. I don't think anyone in their right mind believes this.

But there are people who believe that they have solutions that will help reduce child abuse.

Forbes Magazine had an article called "The Economics of Child Abuse" and gives insights on what could be done to reduce child abuse. It was written by an economist from the Ludwig Von Mises Institute (the same institute I am a part of); as an Assistant Professor at Rhodes College he holds stronger Austrian economics views than I do. His article will prove to be challenging to those with conservative and liberal views.

Here's another one from a different author. It may be more challenging than the first article.

Email ThisBlogThis!Share to TwitterShare to FacebookShare to Pinterest
Labels: Videos