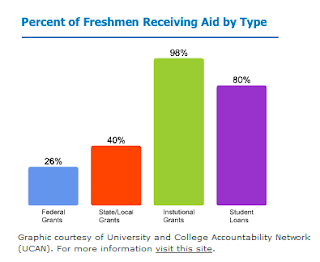 This image was taken from the Ripon College's Scholarships and Financial Aid page.

While Federal Grants are at 26 percent and state/local grants are at 40 percent, the amount of freshmen holding student loans is a staggering 80 percent at this college.

What bothers me so much about this statistic is that colleges can keep the price of tuition higher than what it would have possibly been if the student loans weren't there in the first place.

University planners, knowing that financial aid is guaranteed, plan expansion based on somewhat false signals in the markets (federal grants, student loans). It does not matter how big or small the false signal. They can be lilliputian or large. As long as their is some sort of intervention, there is always going to be some level of malinvestment on behalf of the university because the distortions give a false signal that savings for colleges are there even when they are not. Eventually, the number of students able to pay for college will shrink once the price of tuition becomes too high and the true number of adequate savers will be revealed.

Even the adequate savers get punished because they, too, pay an artificially high tuition price.

Budget cuts, department cuts, tuition hikes, and major cuts will ensue as a result of decreased revenues. However, they would not have to happen, or at least be as severe, I think, if the distortion were absent and university accountants were allowed to plan growth within budget and naturally.
at December 14, 2010