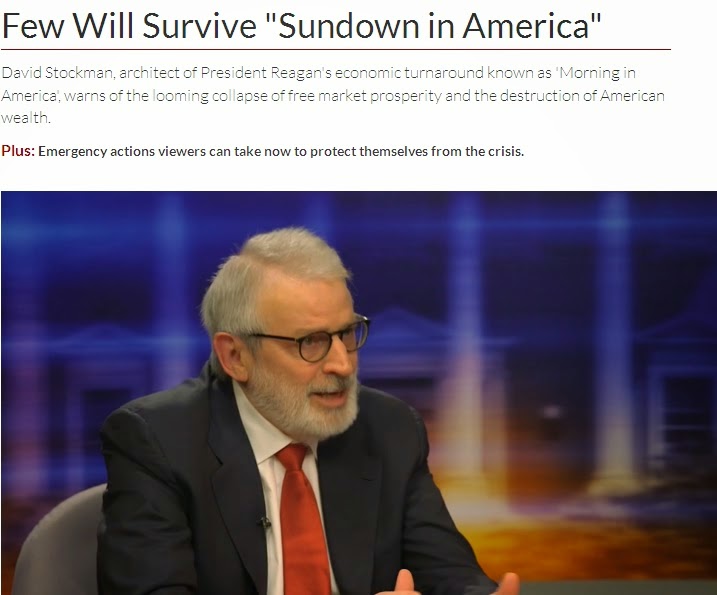 David Stockman, architect of President Reagan’s economic turnaround known as ‘Morning in America’, warns of the looming collapse of free market prosperity and the destruction of American wealth. Plus: Emergency actions viewers can take now to protect themselves from the crisis.

As I've said previously, the recession is not over. In 2011, I remember posting an article on Facebook from Lew Rockwell talking about America entering another great depression.  It drew the ire of skeptics.

In fact, my motivation for starting The Goins Report in 2009 was precisely because I began to understand free-market economics, and I knew that the president's stimulus plan, and all other forms of violent economic intervention into the markets, was not going to save us...period.

My friends very incorrectly even thought I was a George Bush supporter because I came of age intellectually at the end of 2008 and opposed Obama's policies from the beginning. But if I had come of age a year earlier, or two years earlier, I would have been just as vocal about George W. Bush.

So I went on the intellectual warpath and began to warn friends about the intrinsic shortcomings of government economic policy.

And I proceeded to prepare myself for the downturns and dollar crises that I thought would come.

But now I want to share a link with you to help you, while there is still time.

Since 2010, I have had a page with links to movies that warned that the economic crisis is not over.

Since 2009, I have provided a free-book warning on how to protect yourself from the Federal Reserve's disastrous inflationary policies. In fact, it is my most visited blog post with over 1,000 hits.

Time and again, the true free-markets economists have warned that the current economy "recovery" is no recovery at all. While I can not say when, or where, or what will cause the next economic bubble to pop -- and indeed no good free-market economist tries -- I know that the ball is up in the air, and it is being continuously hit upwards by government and central bank policies. But every volley ball game has to end. The ball must come down eventually.

But it doesn't have to come down on you or your side of the court.

You can be on the winning team.

"The prudent sees danger and hides himself, but the simple go on and suffer for it." Proverbs 22:3 (ESV)

That is the Bible's wisdom for our day.

Don't be simple; be prudent. Watch the video.  Download this free book. Prepare.