Reason #2 Why I want to see Rand Paul Vs. Bernie Sanders

Hillary Clinton, the only other person to have a chance at winning the Democratic presidential nomination, will advance the Bush/Obama march toward war in the Middle East. PCR says Clinton will ignite nuclear war.

She is way too dangerous.

Trump ought not win because as much as I like his non-interventionist foreign policy -- he believes Muslim countries should take care of ISIS -- he is a buffoon when it comes to both domestic and international economics. He touts protectionist economic claptrap that has been refuted centuries ago.

He will aid in the destruction of our economy.

The latter criticism -- foreign policy and all -- applies to Sanders, too. But socialism was only refuted fairly recently in 1991. Democratic socialism, which Sanders advocates, clearly hasn't been refuted in the eyes of the public. 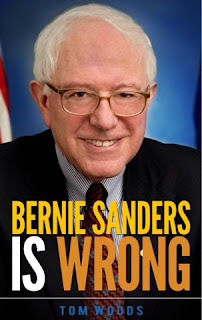 Get a free E-book on Bernie Sanders here.

Email ThisBlogThis!Share to TwitterShare to FacebookShare to Pinterest
Labels: Bernie Sanders, Donald Trump, Hillary Clinton, Rand Paul, Rand Paul 2016, Reasons to Vote for Rand Paul, Why You Should Not Vote For Bernie Sanders