The insufficiency of Sunday-only worship and schooling 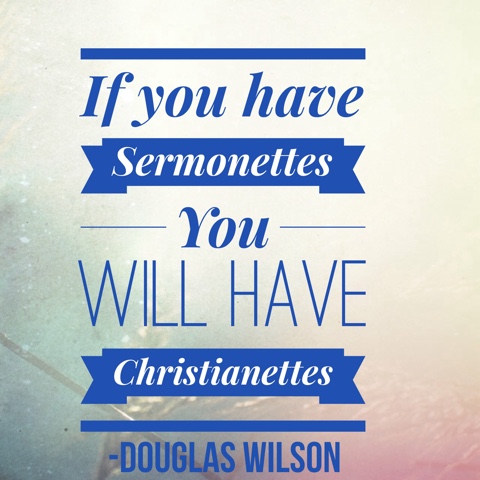 In his "State of the Church 2014" sermon, Douglas Wilson said "If you have sermonettes, you will have Christianettes." That is, if all you are getting is a 20 minute sermon a week, 20+ minutes of worship, you aren't really becoming a Christian. You're becoming a "Christianette."

In the same sermon, he praised his church for being people who strive to be bible people -- a congregation that knows their bible. It's pleasing to a pastor when a pastor can dig deeper into the scriptures, Wilson said, rather than going over the elementary parts of the faith all over again.

It's a great point.

Back in 2010, Gary Demar noted something similar. He noted that humanists are happy that many Christians are only spending just a little bit of time in church and more time in secular public schools.

Many Christians claim a form of factual neutrality where some subjects (e.g., science, medicine, technology, geography, politics, mathematics) can be taught without any regard to religious presuppositions since “facts speak for themselves.” This is most evident in education where a self-conscious sacred-secular divide is maintained and supported by Christians. Ninety percent of Christian parents send their children to government schools. Since these parents believe that math is math and history is history, the religious stuff can be made up at church. But one hour of Sunday school and an hour at Youth Meeting each week and maybe a mission trip in the summer can’t make up for five days a week, six hours each day, 10 months of the year, 12+ years of a government-developed curriculum that is humanistic to the core.

He then quotes a humanist publication from the 1930s to drive home the point. Demar writes:

The humanists understand the importance of education in creating worldview shifts and control, so why don’t Christians? Charles Francis Potter, who founded the First Humanist Society of New York in 1929 and signed the first Humanist Manifesto in 1933, made no secret of the purpose of the American public schools:

Education is thus a most powerful ally of Humanism, and every American public school is a school of Humanism. What can the theistic Sunday-school, meeting for an hour once a week, and teaching only a fraction of the children, do to stem the tide of a five-day program of humanistic teaching.